When we left off last time, we had a small script that:

But that’s a pretty poor script, because it only runs if the disk & partition numbers line up (otherwise you have to edit each line to match what you’re working with). So let’s try to “generalize” this script for more universal application.

Start at the beginning–the first line of our script. How could we select or “Get” just the disks that are “Offline,” and pipe the result into our first “Set-Disk” command, putting them online?

It turns out, we can do [SOMETHING] like this. That [SOMETHING] is: the Where-Object command. Remember–we just want to select those disks that have an IsOffline status of $True. In order to do that, we can always utilize the “Where-Object” command. Like this:

If I want to, I can take the output of this command and “pipe” it into the Set-Disk command we used earlier, where we will be able to switch the -IsOffline property to $False. Like this:

As you type commands into the ISE scripting window, you will notice that context menus pop-up to help you finish your intended pattern. You can hit “tab” on your keyboard to complete the most likely selections as you move along. 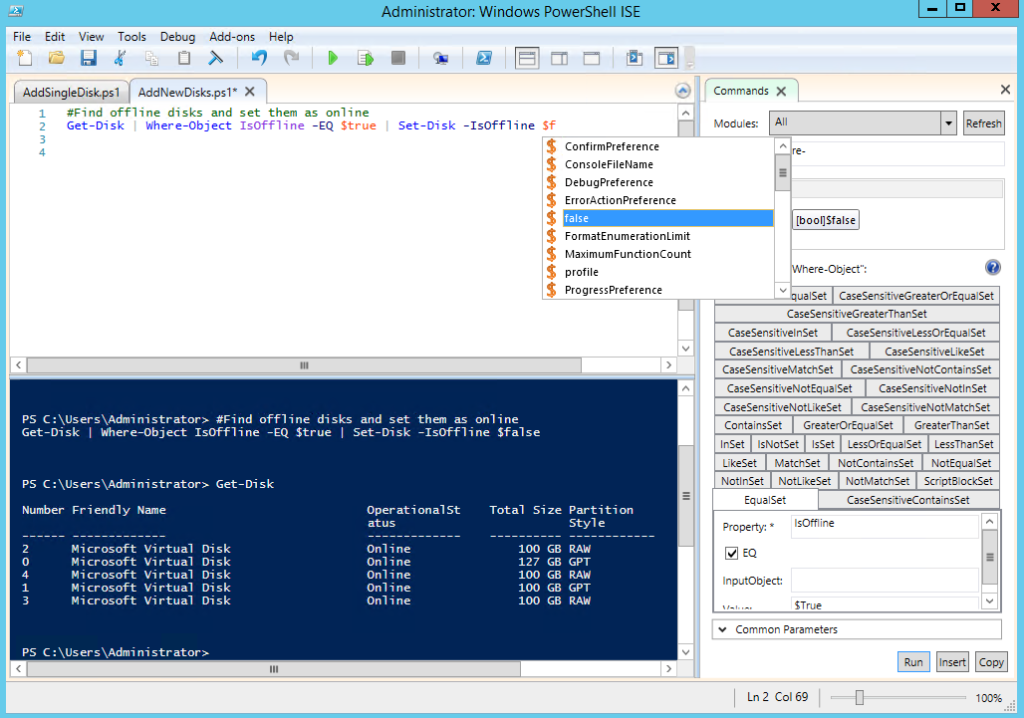 Just to verify it worked, Get-Disk reveals that all of our disks have now been switched to “Online.” Awesome! But wait, we’d be pretty disappointed with ourselves if we stopped there. In Disk Management, we can see that our disks have not even been initialized yet, nor do we have any partitions! 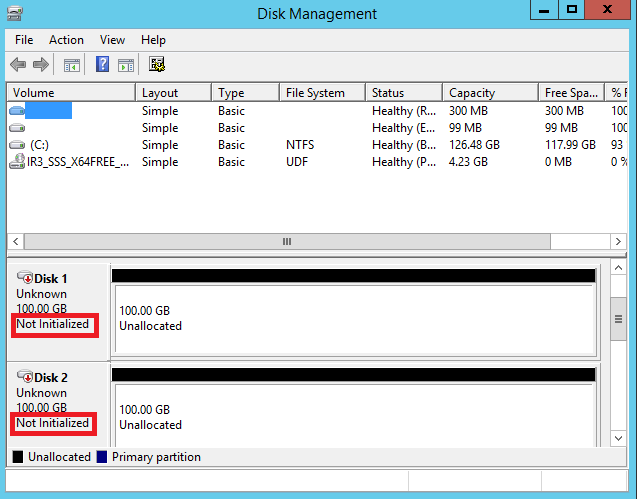 Again, let’s return to Get-Disk, and figure out how we might select only the new (uninitialized) disks.

Ah-ha–it looks like any disks that have not yet been initialized/formatted will have a “RAW” Partition Style.

Now I want to explore another way of getting & filtering a set of objects, then working with that sub-selection. Similar to what we did above, let’s use Get-Disk and Where-Object, but this time, let’s store the result into a variable.

A variable is just a placeholder. It starts with a dollar symbol ($) and can have any name at all behind it. Like this:

Now, this variable which we named “$NewDisks” can be called upon over and over again later on in our script.  Let’s see an example in action.

Find Initialize-Disk again, since that was our next task, and let’s just fill out the form it provides us. Instead of using “ByNumber”–like we did last time–flip to the InputObject tab instead, and use the variable as the InputObject. Copy this and paste it into your script. 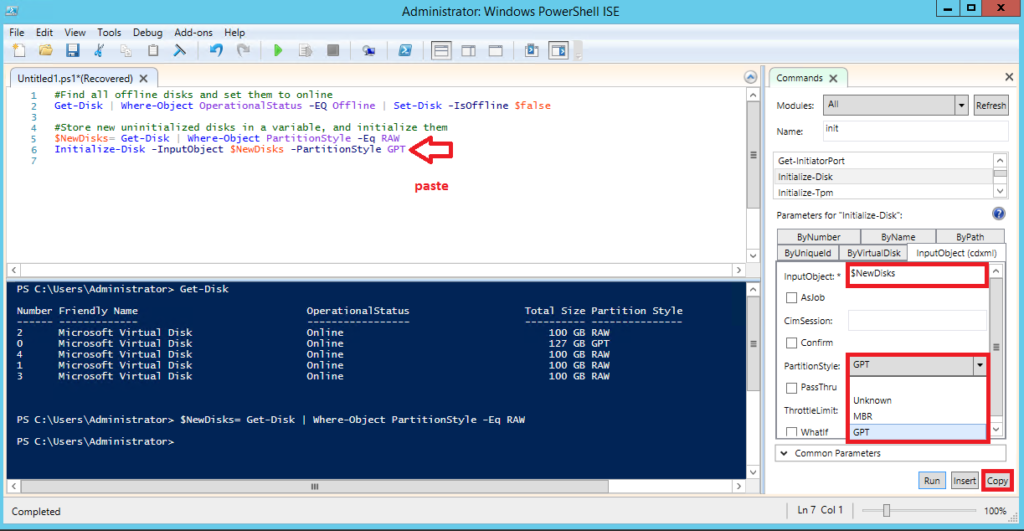 Let’s run that line, and then Get-Disk once more to confirm that a Partition Style of GPT has been set.

Next: We make partitions. Searching for “partition” quickly brings up the “New-Partition” cmdlet. Again, we can use the InputObject option with our saved variable–how about that?! 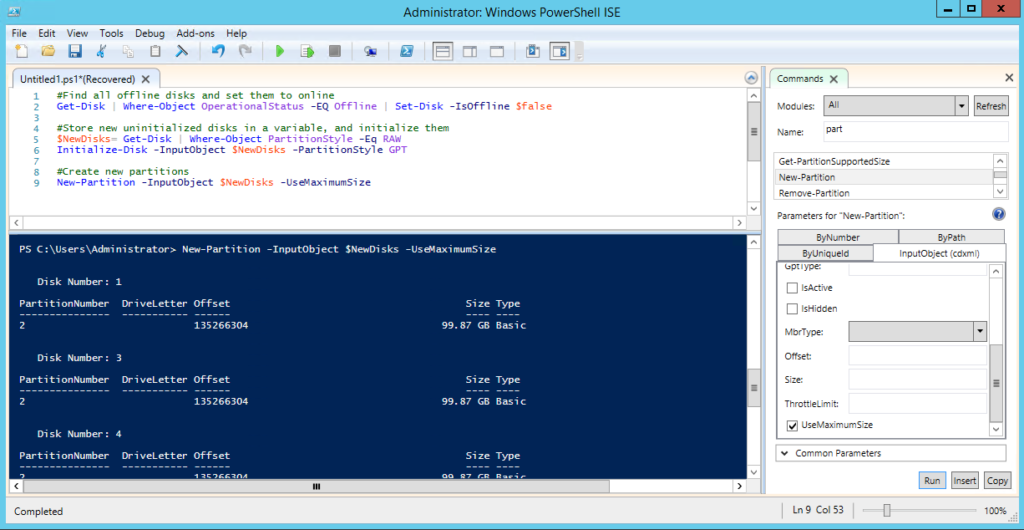 Last, we have to figure out how to get some new volumes out of all this work–again we want them formatted as NTFS volumes. If you’ve already returned to the Format-Volume cmdlet, you might have noticed that you were unable to use the $NewDisks variable again. That’s because Format-Volume is not looking for disks; it wants to work with partitions instead, remember? We need:

So let’s find that [SOMETHING] that is common to all of our newly minted partitions. Examine the output of:

Instead of listing everything as a table, this command will display all of the properties of an object in list format. You will notice that every partition we would like to select has the IsBoot property set to False (so we do not select C:\). Additionally, we do not want to select a Reserved/Recovery partition–so it should say “Basic” instead. Therefore, we can select those partitions as follows:

And that is how we will select the partitions that will be formatted as volumes. Do not forget: if you were to run the Format-Volume command now, you would receive a confirmation prompt, like this one:

We want to avoid these kinds of interruptions in our script, so let’s add the Confirm switch to the end: 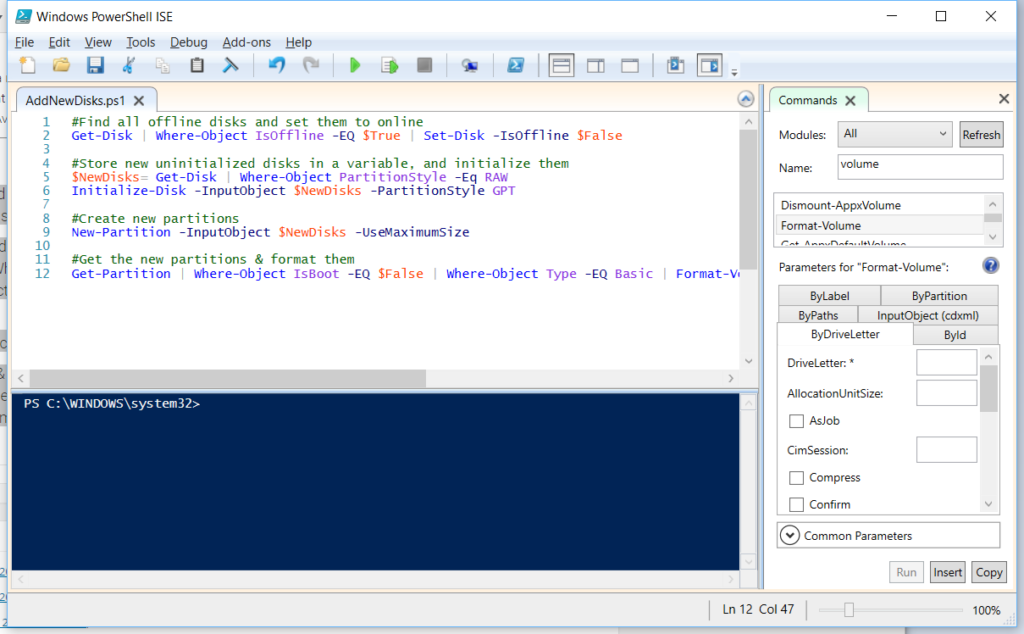 And just like that, we have successfully scripted a fairly non-trivial set of tasks in generalized form.

This is not a perfect script, and it could be improved (think about it–and try to manipulate it for your own purposes).

Maybe you’d like to assign drive letters here, or maybe these disks will not require drive letters–for example, perhaps you are adding them as Cluster Shared Volumes (CSV)’s into a failover cluster, like this:

Whatever the case, you can continue building on your script, and save it using this tool (File, Save As). You might not think this is a time saver at first, but that’s just because you’re still learning. It might hit you when you are running this script for the umpteenth time–it takes seconds and you do not have to open Disk Management or click through a bunch of different screens and confirmation prompts.

ISE is not only fun to use, it is a massive time-saver, too!  I hope you’ll agree. Soon I will share how I used this tool to create an automated setup & deployment process for a two-node Hyper-V cluster (we sell a lot of them since they are such a great, cost-effective way to provide High Availability on-premises).

Summary of this script:

For a long time now, we administrators have had the ability to provide email authentication for our customers using SPF,... read more

These days, I am willing to bet that I get asked about BYOD endpoints over corporate endpoints 10 to 1.... read more

It's not even a question in my mind anymore--every org who moves their email and other data sets into Office... read more

Should I stick with Microsoft 365 Business or move up to Enterprise?

Microsoft 365 is best described as a "bundle of bundles"--these new SKU's go beyond Office 365, and include advanced security... read more

I had a series of posts on the topic of migrating from SBS to Office 365 and Windows Server a... read more

How-to setup Intune quickly (and strategically) in your environment

UPDATE: I have updated the setup script to now be a single script, with the JSON files embedded within it.... read more

In the previous post, we discussed Microsoft Azure Backup Server, and covered the basic setup/installation process for this software. In... read more

Hey, somebody moved my cheese again... If you configured an anonymous relay connector in Exchange 2013, for example to allow scan-to-email from... read more

This is a four-part post on Azure Rights Management for Office 365. The Azure RMS service is a powerful tool that we can... read more