Hey, somebody moved my cheese again…

If you configured an anonymous relay connector in Exchange 2013, for example to allow scan-to-email from an MFP device or other on-premise application, you probably remember that you needed to choose “Frontend Transport” and “Custom.” If you left it on Hub Transport, it would fail, since the binding on port 25 already exists in the default connectors for the hub transport role. So you had to associate it with the Frontend Transport, instead. This was a change from previous version of Exchange where an anonymous relay would have been configured as part of the hub transport.

Welldontchaknowit somebody went and changed things on us again. In Exchange Server 2016 CU2, we see the following: 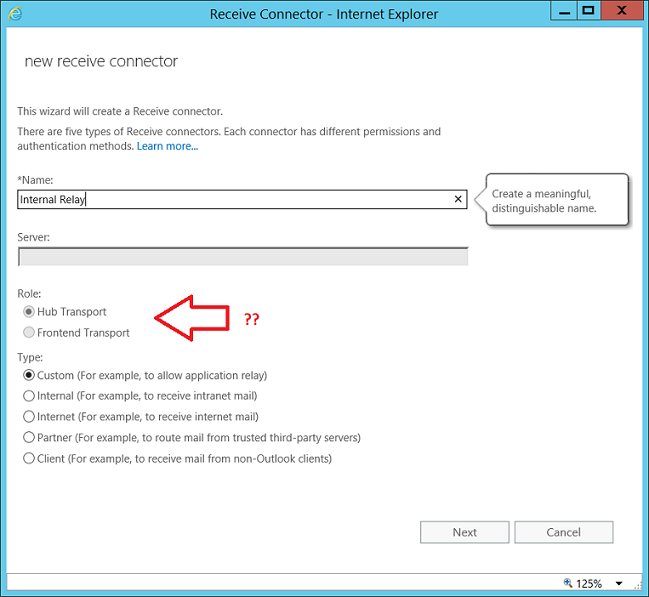 The Frontend Transport option is now greyed out. Simply picking Custom here and moving forward will just result in a failure, since port 25 already has a binding on the default connector, just as before. So here is what you have to do instead: open the Exchange Management Shell, and create the new connector like so:

Obviously replacing the above IP information with values relevant to your own environment. Once the connector is created you will be able to open and edit it in the GUI just like always, but to get it going initially, you’ll have to use the New-ReceiveConnector cmdlet. I haven’t found any reasons for why this is the case, and maybe it’s just a quirk that will disappear again in a future CU, but until then, I hope this helps.

How to Encrypt your Hyper-V Host Server using the GUI

Full disk encryption is becoming more important in the SMB.  I recommend this for every Windows 10 Pro PC, and... read more

Encrypting guest virtual machines is another layer of protection you can add in Hyper-V. Why would an admin want to... read more

When you have a hybrid environment configured between Exchange 2010 or 2013 and Office 365, then you will probably have... read more

Okay, so hopefully everyone knows by now that MFA is not an "optional" thing that you can decide to turn... read more

As many of us are now aware, a recent June update (MS16-072) causes certain GPO's to stop working. Short of... read more

So you setup a third party backup system, sticking mostly to defaults on the job settings, with "application aware" or... read more

With a traditional MDM solution, the goal is typically to impose management controls at the device level--enforcing policies like pass... read more

Most small businesses that were invested in the Small Business Server (SBS) platform are migrating to Office 365. This means... read more

How to Activate Azure Information Protection for Office 365

This is a four-part post on Azure Information Protection (formerly Rights Management) for Office 365. This service is a powerful tool... read more