I have performed server migrations for a lot of clients over the years, and honestly I don’t see this issue come up all that often. But when it does strike, so-called “phantom” printers, or removing printers whose drivers have “gone bad” can be one of the more annoying problems to troubleshoot–especially when you remove the printers, reboot the computer and they magically reappear again.*  My process for resolving this type of “weirdness” can help you circumvent spending too much time troubleshooting those one or two workstations that just won’t let go of old (retired) printer shares, or new printer shares that are being wonky on a system or two.

In general, my approach to migrating printers can be reviewed here, where I describe removing legacy printer shares via a small logon script that removes each named printer as follows:

Just repeat that line for every printer you want to remove. I usually publish the new printer shares via group policy using the Print Management console.  It is a good idea to sweep through the existing GPO’s and startup scripts to make sure there aren’t any remaining references  to the old printer shares, either.

If for some reason, workstations are still holding onto old printer shares (even when you’ve verified they are no longer published), and manually removing/deleting them is also unsuccessful, then you can “super-delete” them manually from stubborn workstations with this process: 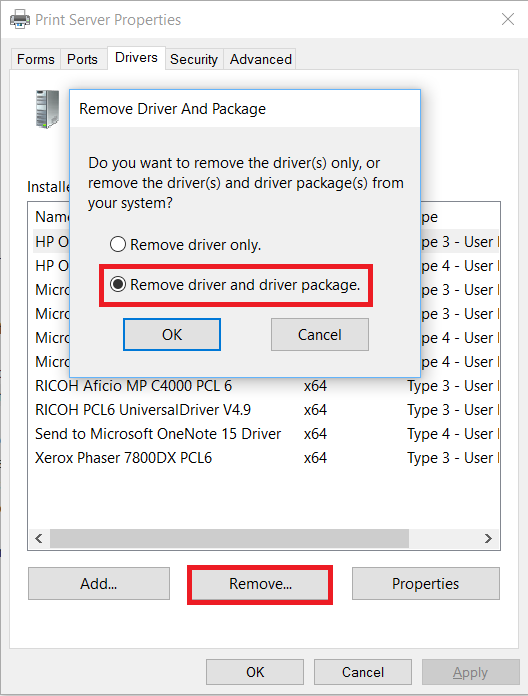 Note that you can optionally remove ports associated with the printer as long as you’re in there, although I tend not to do this if the new printer has the same IP, for example, and is just shared out from a new server location. The above process is also effective in removing printers from  workstations when they are generally misbehaving, such as printing odd-looking characters, or otherwise not being able to print properly. I usually find that removing them in this manner, and simply re-adding the printer from the server share afterward clears it right up.

*By the way, terms like “phantom” and “wonky” or similar (corrupted, weird, etc.)–these are just technical jargon terms for, “I don’t actually know why that happened.” Which is fine in some cases–as long as you can also say, “Here’s how we’re going to fix it.”  The problem of course is, since there is no discernible root cause, how do you know it won’t happen again? I dunno, but we have this fix, and it seems to work okay.  I don’t have an explanation for why this happens sometimes, but I have found these to be reasonably effective steps for remedying the problem.

I have done quite a few posts recently on the new Office Message Encryption (OME) features in Office 365 Exchange... read more

Organizations who are moving to Office 365 are always faced with the same dilemma: where to start? What subscription bundle... read more

I have written one post on Microsoft 365 (Business edition) so far. And I haven't had as much time to... read more

How to teach yourself PowerShell using ISE

There is no reason to be afraid of PowerShell. I know a lot of IT generalists out there have avoided... read more

How to require MFA for Azure AD Join, and enable Enterprise State Roaming

Hey folks! We have already covered a few posts on Azure AD Premium and Conditional access; and that's great--because you... read more

In some circumstances, you might want users to have their choice: Use the native mail apps and have their mobile... read more

Do you have a Remote Desktop Server (properly) configured with the Gateway Role in your environment? In this configuration, all... read more

The Center for Internet Security (CIS) publishes 20 controls in their cyber-security framework. If you want to understand what good... read more

Updated Migration Advice: Remove the last Exchange Server? July 11, 2022
Selling the Digital Transformation Journey: Security & Compliance June 16, 2022
What are the limitations with Microsoft Defender for Business Standalone? June 2, 2022
Making sense of the many DLP options for Microsoft 365 May 18, 2022
A Sneak Peek at Application Management for Edge April 25, 2022