I previously commented when Microsoft released new password guidance, which is backed by their own research as well as that of NIST. A quick recap of that:

Pretty interesting advice all around, since it flies in the face of what we’ve been preaching and doing for years. As a supplemental note here, Microsoft has also published an article on how you can take specific steps to better secure your identity infrastructure, which follows the advice above as well as the Identity Secure Score assessment card. The Secure Score system, for those who don’t know, is an automated assessment that encourages you to enable better security controls within your Microsoft 365 / Azure AD tenant (and of course, to purchase more security add-on subscriptions).

But much of this advice could be flipped upside down with the ability to implement a password-less sign-in to Azure AD.

Microsoft also recently announced that for Microsoft accounts (not Work or School accounts in Azure AD, but “consumer” Microsoft accounts), we now have the ability to replace our passwords with Windows Hello, or with a FIDO2-compatible security key. In either case, the password prompt is never really required, and you get two-factor authentication in one single step.

With Hello, for instance, you can unlock a device using a local PIN or biometric, or some other local gesture. That secret never leaves the device, but passing that step verifies that the person in possession of the device is legit. The authentication to Microsoft’s servers in the cloud is then handled by the device itself using a public/private key pair–so when you unlock a device with your local gesture, the device signs on your behalf using the private key (which is stored on the hardware-based TPM, or in a software-based TPM).

Technically speaking Microsoft has been marketing this technology as “two-in-one-factor” (local gesture or biometric + private key stored on the hardware). But yubico, who partnered with giants Google and Microsoft in the development of FIDO2 standards, still calls this implementation–password-less–a single-factor. The debate here starts to get into some strange philosophical distinctions, but either way this form of authentication is considered much stronger than traditional passwords.

We don’t have this same FIDO2-based capability yet with Azure AD accounts, but we are promised it is coming soon. However, you can already enable a “no passwords” experience for your users, and it all happens via the Microsoft Authenticator app. It works like this: 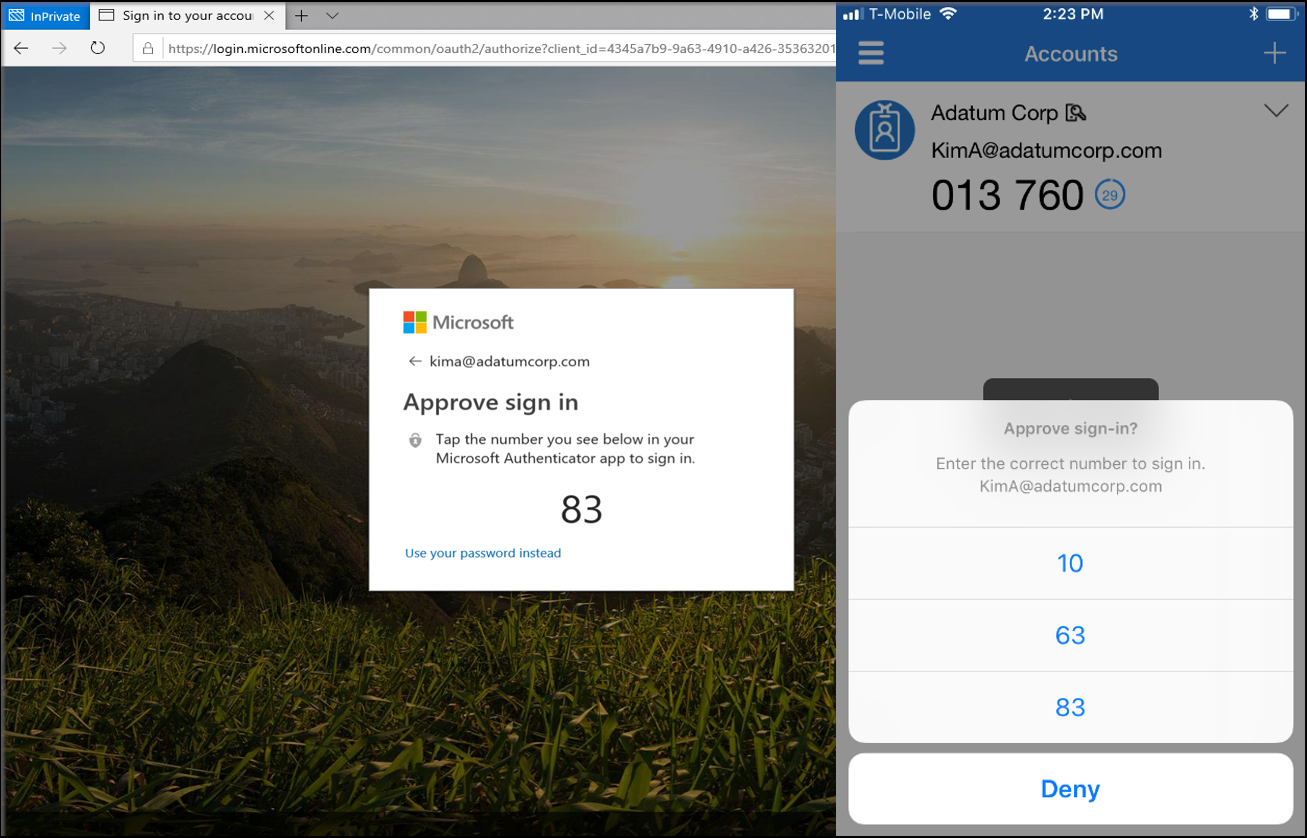 This mechanism is only in preview, and again, it does require using the Microsoft Authenticator app (latest version on iOS 8+ or Android 6+); but it is nevertheless another possible avenue for eliminating passwords. The FIDO2 thing is a pretty big deal, too, since it embraces a standards-based set of devices and protocols, in addition to what has been offered in the past. I get a surprising number of requests, especially from financial services companies, for hardware-based* MFA (rather than using the app or an SMS text). So I look forward to seeing that implemented also for Azure AD (sometime in Spring 2019, they say in their announcement).

To be clear, I have not implemented this yet. I am curious to see how it plays with various apps. I gather from reading that it may not work everywhere yet, and that there are other caveats to it. I notice also in the screenshot above that the password is still a fall-back option, meaning that you may still need to rely on it under certain circumstances (unless there is a way to enforce the no-password experience only?).

From where we stand today and looking forward, it would seem that this no-password thing sort of removes the need for “password guidance.” For instance, if you were to enforce a FIDO2-type of experience (remove the option to use a password in general), what good is a risk-based MFA challenge now? If a rogue actor tries to sign-in from China or some other foreign place, they are already going to be presented with this password-less experience–the “weak” or compromised password does not matter in this case. And why would a user ever need to self-service reset their own password at this point?

I have had this debate with others in the past, especially in regards to Conditional access and MFA–why wouldn’t you just require MFA in all cases, versus so-called “high risk” cases only? The answer usually comes down to user experience–avoiding that second step in situations that are deemed “less risky” just makes life easier–plus, you will notice, it helps to sell Azure AD Premium subscriptions!  But a “no-password” setup like this one, using Hello or some FIDO2 device, might settle this argument once and for all–go password-less, and collapse two authentication mechanisms into one  End of debate. Thoughts?

*Note: I have noticed that some of these hardware devices simply require you to tap a button on a USB stick inserted in the computer–I cannot imagine this is as safe as Windows Hello, where the private key is protected by a gesture that you either know (PIN) or are (biometric). After all, if anyone can pick up your USB key and then use it to login as you just by tapping a button–no bueno. I would personally go with Hello, or another hardware key that has some biometric such as a fingerprint scanner or facial recognition built-in.

After implementing DLP policies in your organization, you might consider testing it out. Let's say you implemented Microsoft's DLP policy... read more

Azure Virtual Machines: Were you aware of the MAJOR caveat to their SLA?

I think this is important to many Azure customers, but very few seem to be aware of it.  So, I... read more

There is no doubt about it, more and more workloads are moving to the cloud these days, especially in the... read more

Last time we looked at how to get started with Microsoft Defender for Business and the so-called "Simplified configuration process,"... read more

The Measure of Success

How do you measure success? In the world of consulting, we live and die by the billable hour. Utilization. But I... read more

Removing local admin: a game of compromise (and some tips and tricks)

Look, I am a realist. Yes: from a security perspective it would be ideal if we could take away local... read more

Recently I wrote a few articles on the various subscriptions out there, and how confusing everything is getting as the... read more

Configure alerts for your 365 Tenant from the Security & Compliance Center

If you have an Office 365 or Microsoft 365 subscription, then you should check out the Security & Compliance Center--there... read more