I have written one post on Microsoft 365 (Business edition) so far. And I haven’t had as much time to continue playing with it as I like. But, here is what I can tell you: the literature out there on these SKU’s can be confusing, since they are mostly marketing-oriented, and non-technical.

So here is the deal: Microsoft 365 is basically a bundle of bundles: Office 365, Enterprise Mobility & Security (EMS), and also Windows 10 licensing which unlocks some additional security/device management features: 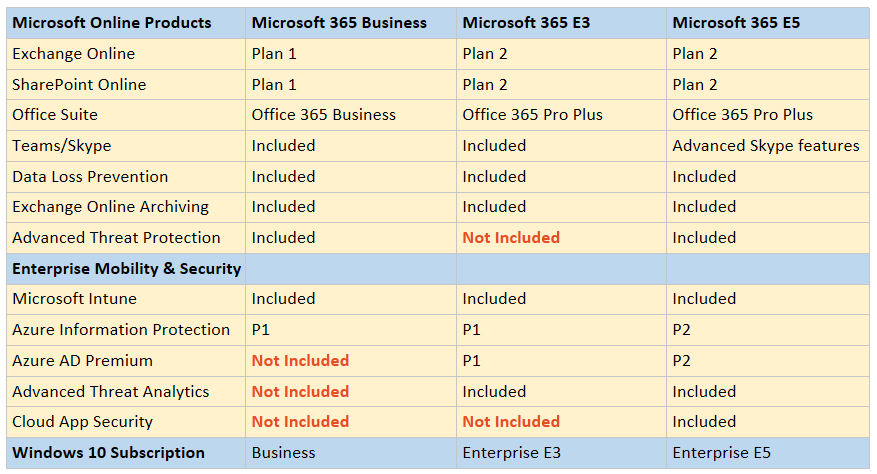 *Note: the Microsoft 365 Business edition does NOT include a full blown EMS E3 subscription, but it does include Azure Information Protection P1 and Microsoft Intune; I do not, however, see that Azure AD Premium P1 is included, just regular Azure AD, and no sign of ATA, either, but ATP is indeed included.

Now, I have written on both the Office 365 bundles, as well as the EMS bundles, in my two previous posts, so refer to those if you want to examine the differences between these plans closer. I can also recommend the Office 365 Service Descriptions for more detail, if you’re curious. The enterprise level subscriptions here especially contain a lot of security goodies since they are bundled with EMS E3 and E5, but even the Business edition has some surprisingly awesome features, like Azure Info Protection, Intune and ATP. A quick review of the pricing in USD (at the time of this writing):

The Windows 10 / Device Management portion of this package works as follows:

From a practical perspective, this means three things:

That’s about it–sorry if it seems like a lack-luster presentation, but there it is in a nutshell. In short, it seems that the “Microsoft 365 Business” subscription generally assumes that the assets being joined to the subscription are not managed on-premises, or that the organization is primarily cloud-based. The Microsoft 365 Enterprise” editions generally assume hybrid infrastructure–on-premises and in-cloud, evidenced by the presence of both Windows 10 client OS licensing as well as Windows Server CAL’s via EMS.

*Nevertheless, it would be possible to use this subscription with premises-based AD-joined devices–e.g. you could “hybrid-join” the devices to both on-premises and Azure AD.  And note: It is also possible to hard-join devices to Azure AD with an Office 365 subscription only, but you just don’t get the same level of device control including pushing a policy down to the device, and remote device wipe for Windows 10. Nevertheless, you should realize that it is possible to join a device to Azure AD, even without this larger subscription bundle.

Hi Alex, I’m working on getting some of my clients over to M365 Business from O365 Business Premium. I’ve searched... read more

What a fun tongue twister, and such a practical resource that I am excited to share with you today! Well,... read more

If you are starting to do more Azure AD Join (or disjoin/rejoin) operations, you may run into some issues at... read more

I have previously described MFA for Office 365. It's a great way to add an extra layer of security to... read more

How to initiate a test failover to Azure Site Recovery

If you've been following along with this series, we have already: Extended our On-Premises Network to Azure Virtual Network Replicated... read more

Vulnerability Assessments vs. Pen Testing: Walk before you run

Sales people are some of my favorite people in the world. They make me laugh out loud almost every day.... read more

Today I want to discuss retention policies, which can be administered via the Security & Compliance admin center in Microsoft... read more

I still regularly receive questions from independent IT consultants as well as Managed Services Providers about Microsoft 365 in relation... read more

Okay, so the big day has finally arrived! We have been sitting on PINS AND NEEDLES waiting for this announcement,... read more