For many months now, I have been playing around with the Windows Server 2016 Technical Previews, especially the Essentials Experience role. You might ask:

Why? Does the Windows Server Essentials product matter anymore, now that we have Office 365 and have moved well past the days of Small Business Server?

It is true that many SMB’s will probably forgo the Essentials Experience in favor of running Windows Server Standard and utilizing Azure AD Connect–arguably this solution provides more robust hybrid management features, including some really cool options like password write-back with an Azure AD Premium or Enterprise Mobility Suite subscription.

Nevertheless, here’s my official opinion: the Windows Server Essentials Experience does indeed matter for the SMB (or SME if you’re working in the UK). Why? Because it all goes back to the Small Business Server products in the end. Even when we started to offer Windows Server Standard, Enterprise or Datacenter implementations of 2008R2 and 2012 over SBS 2011 or Essentials 2012, we modeled our offerings in the SMB market space around the core functionality and feature sets that were familiar from the SBS line of products.

Sure, maybe we used a virtualization platform like VMware or Hyper-V under the hood, and a third party backup option that natively supported virtualization. And sure, maybe we enabled Remote Desktop Services in place of the Remote Web Access feature (now called Anywhere Access in Windows Server Essentials). And okay, we also moved email to Office 365 or installed a standalone Exchange Server separate from our domain controller. But at the end of the day, the standard SMB network looked and functioned, well, a lot like an old fashioned SBS network might.

In 2016, the “SBS” network has come a long ways since the days of its last release in 2011. Since the advent of WS 2012 and 2012 R2 after it, customers have been leaning more heavily toward cloud-based applications and services in a hybrid environment. And there are many hundreds if not thousands of cloud apps to choose from now.

The Windows Server Essentials Experience could be viewed as a road-map of sorts for what to expect in the SMB space in general–which roles & online services are seen as the most crucial in our market segment, according to Microsoft? How do we transition from our traditional on-premises based solutions to these new “cloudy” ones?  Stay tuned for the upcoming series on the Microsoft Cloud Services integration features included with the Windows Server 2016 Essentials Experience, and find out! We will cover the following topics:

We begin by installing the Essentials Experience role. This is done in one of two ways: PowerShell or using Server Manager. The PowerShell method is as follows: open an Administrator PowerShell session and type:

Otherwise, from Server Manager Dashboard, you can choose Add Roles and Features, and select the Windows Server Essentials Experience. 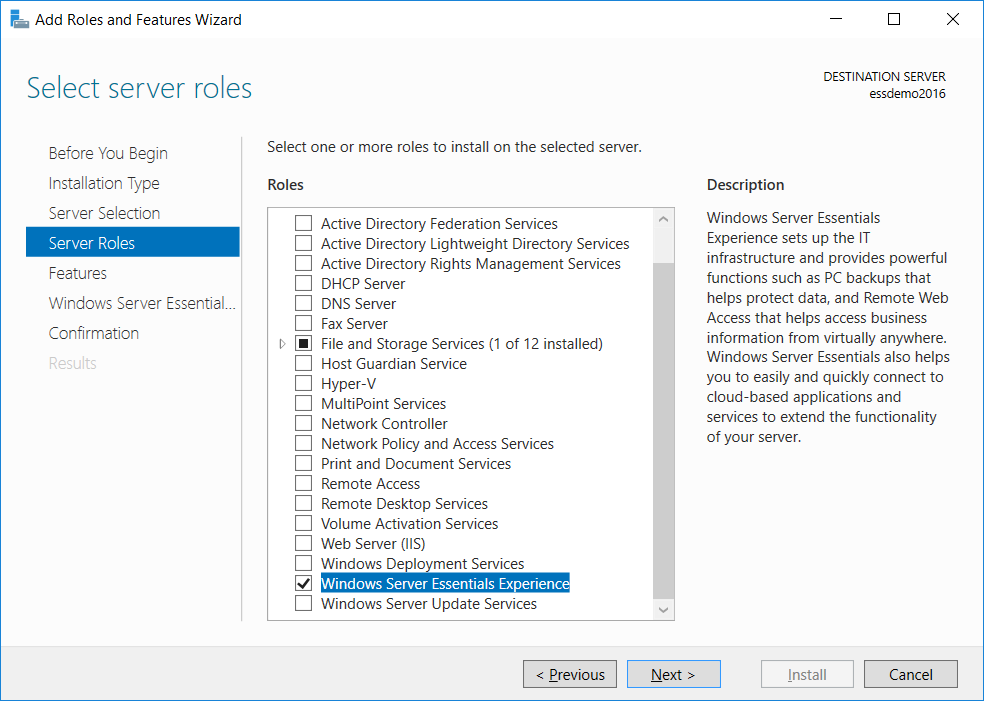 After this is complete, you will be able to finish the setup by returning to the Server Manager Dashboard, and choosing the tasks in the upper right corner of the screen: 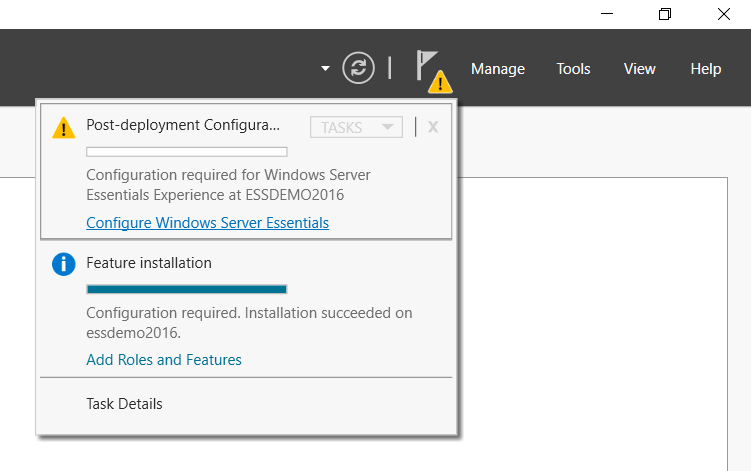 If you add this role to a member server, the configuration wizard will default to keeping the Essentials Experience as a member server. If you add it to a Domain Controller (e.g. as a 1-1 replacement for an old SBS Server), it will likewise be configured as such. Both configurations are supported with the use of the Microsoft Cloud Services integrations.

I have been a long-time fan and advocate for Microsoft’s Windows Small Business Server products.  I am not sure if I can count how many SBS 2003, 2008, and 2011 implementations I’ve done over the years.  Like many people, I was sad to see the product discontinued some years back. However, I was also excited for its replacement: Windows Server Essentials & Office 365.

I especially enjoyed the addition of the “Essentials Experience” server role to WS 2012R2, which is also available on 2016.  This removed licensing ambiguity and opened up more seats–instead of supporting a maximum of 25 users / 50 devices on Essentials, we can now support up to 100 users / 200 devices on Standard with the role enabled. In reality, I do not end up deploying Essentials as often as I do Standard or Datacenter editions these days, but I will often point out some of the goodies included with the Essentials Experience role.

Join us next time as we begin to configure the various Microsoft Cloud Services integrations, starting with Azure AD & Office 365.

I have a previous article on this topic, but the Microsoft 365 Business SKU seems to be getting new features... read more

I recently updated the scripts that I use to provision new Exchange Online tenants and configure them according to best... read more

With this month's updates, I'm moving my published content from its former home at GitHub, to OneDrive for Business. For... read more

As we've previously discussed on this blog, Windows Server Essentials comes with the ability to integrate with Azure AD &... read more

In this series, I am going to show off some of the functionality and customization that you can make in... read more

As many of us are now aware, a recent June update (MS16-072) causes certain GPO's to stop working. Short of... read more

If you are setting up Directory Synchronization from scratch (there are no users in the cloud yet), then Azure AD... read more

Once you have Office 365 Integration working with Windows Server Essentials 2016, you can also manage SharePoint libraries from the... read more

Is Azure Backup as good as offline backup?

I am posing this question, not just for Azure Backup, but any cloud-based backup. Here's the question: Is Azure Backup (or... read more