Microsoft 365 Business is an excellent subscription–the best bundle available for the money in my opinion (in the SMB space).  One of the benefits of this subscription is the ease of deployment for Office 365 Business (the desktop apps)–shaving precious time off any new PC setups. It is a trivial matter to activate this “auto-deployment” feature using the initial setup screens in the Microsoft 365 Admin center. 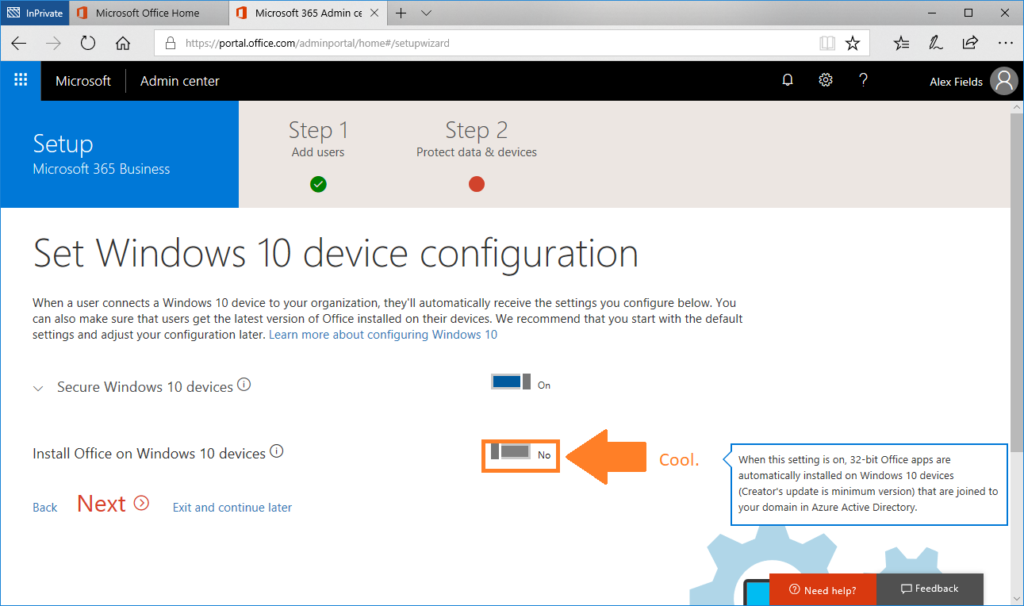 You can also turn it on later, from the Device actions card (choose Manage Office deployment). 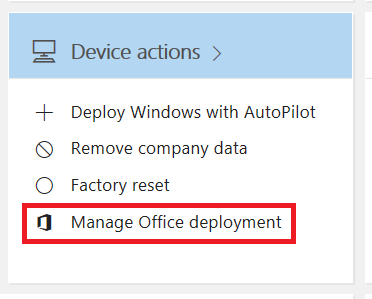 However, there are some known limitations to this feature that you should read about. Namely, it works best if the target PC does not already have a pre-existing installation of Office. E.g. if 64-bit installs are present, or an MSI version is already installed, then the new subscription-based, “Click-2-Run” version of Office will not take.

However, did you know that this fancy app deployment feature is really just leveraging Microsoft Intune in the background? If you dive under the hood of Intune, you will find that it is in fact possible to design your own app assignments, and tweak the settings further via the Intune management portal. For example, you can instruct the device to uninstall other Office versions (.msi), if they exist. As well, you can push other applications, if you choose, from this same interface.

This makes transitioning both new and pre-existing PC’s to 365 Business much easier at scale. As the devices join up to Azure AD (either directly, or in hybrid mode with on-premises AD), the device enrollment feature will check in with Intune for its policies, which include application assignments.

How to manage application deployments in Intune Edit the Office Desktop Suite policy (ignore the references to ProPlus since you do in fact have a Business subscription with Microsoft 365 Business). Here you can see some interesting additional settings. Check out Properties > App Suite Settings, and find  the option to Remove other versions of Office (MSI) from end user devices. 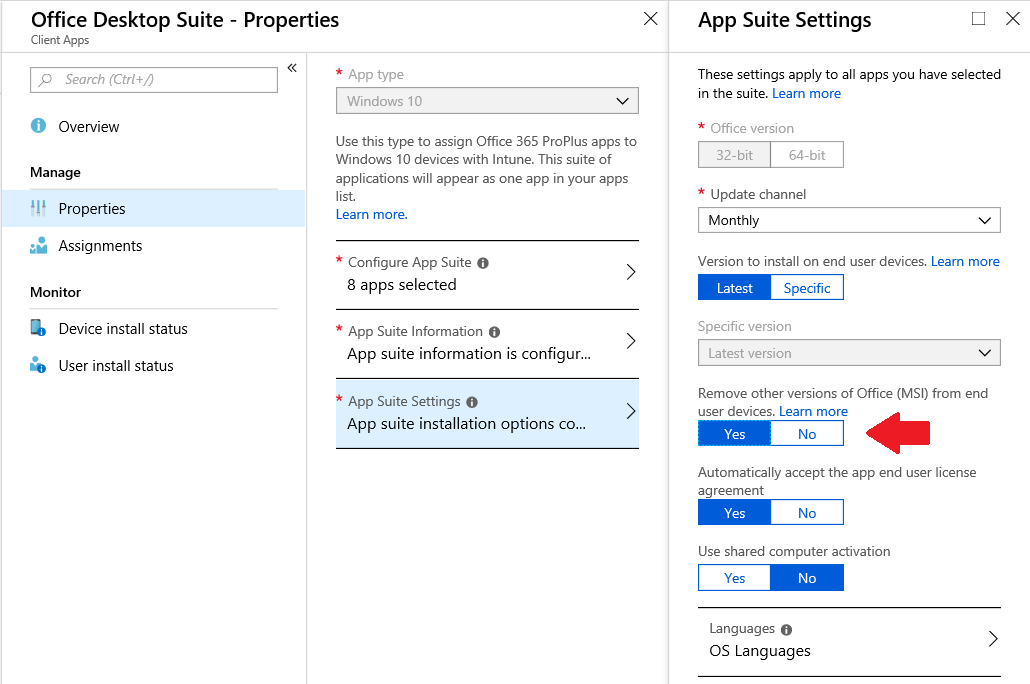 You will notice that this default policy is configured to deploy 32-bit versions of the Office apps, but if 64-bit is a requirement in your environment, it would also be possible to configure a policy to deploy 64-bit, instead. Try building your own app assignments. You can choose to assign apps from the Andriod, iOS and Windows Stores. You can configure Office 365 software assignments to both Windows 10 and macOS. As well, you can deploy Line of business applications and Win32 apps (MSI) also.

Just click on Add to add a new app. Let me create a policy that will deploy C2R versions that are 64-bit instead of 32-bit, and I’ll include Visio, since I have a subscription for that software also. In this example I chose Office 365 Suite > Windows 10. Then under Configure App Suite, choose the applications you want to deploy; I do not include OneDrive (Groove) or Skype for Business. But I will add Visio Pro. Then under App Suite Information I just have to fill in a name and description for this App suite. Click OK and switch to App Suite Settings to choose your options: 64-bit, the Monthly update, and Latest version. Since my users already have 32-bit MSI Office installs, I want to Remove other versions of Office (MSI) from end user devices. I will also choose to Automatically accept… for the EULA. Click OK. Last we just have to assign this application suite. Click on Assignments, then Add group.

For Assignment type, you would choose Required. Notice that one of the other assignment types available is Uninstall, so keep in mind that you can use this option, if you ever need to remove a previously assigned version, such as a 32-bit assignment for Click-2-Run. 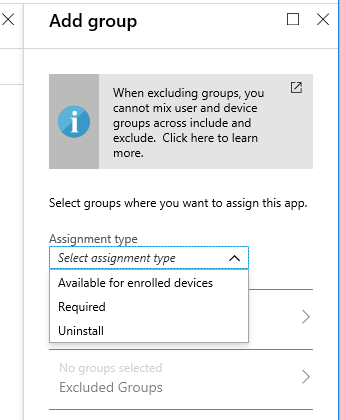 To select a group, pick Yes for Make this app required for all users, then Select groups to include (I chose the All Users group in this simple example). Keep in mind this is just one simple example of what is possible using Intune for application deployment. Interestingly, deployment of Microsoft Teams to Windows 10 is not an option using this method (at least not right now). The best method for accomplishing a Windows 10 Teams deployment at this time is still a PowerShell script (and the script can be pushed using Intune–I will likely do a post on this process soon). Nevertheless you can see there are quite a few options here for you, with most other applications.

Since the Microsoft 365 Business subscription was originally developed/released, there have been some significant changes in licensing. Intune did not used to be one of the bundled packages, even though the subscription was essentially leveraging this technology in the background, exposing only a sub-set of the features via the Microsoft 365 Admin center.  We are anticipating some new updates to the Admin center soon, and I would be surprised if we did not see a few more feature sets from Intune added into this simplified UI moving forward, now that the subscription is officially part of the Microsoft 365 Business bundle.  In the meantime, however, just know that the full power of Microsoft Intune is there for you–so feel free to explore and tweak it to your liking. More on this to come…

Assuming you have already setup integration to Azure AD and Office 365, you should be able to start applying Exchange... read more

Reader Question: Can I sync my Network Drives to Teams?

Dear Alex, I wish to know if its possible to sync files/folders on my Network Server to teams. I have... read more

I think I get more traffic and questions about this topic than just about any other. A lot of people... read more

How to configure Email encryption for Office 365

This is a four-part post on Azure Information Protection (formerly Rights Management) for Office 365. The Azure RMS service is a powerful tool that... read more

I have been playing with the new product this past month since getting access to the preview. If you have... read more

Why you need UAC (and how to enable it)

I don't know why it has come to this, but here it is. Here we are. We need to review... read more

CRUD: When to use Create, Replace, Update or Delete in Group Policy Preferences?

I have to admit: I don't use Group Policy Preferences as much as I probably should. Historically, when I migrate clients from a... read more

PSA: Careful with MAM – there might be more to it than you think

I have written extensively on Mobile Application Management (MAM), as an alternative to Mobile Device Management (MDM). When implemented properly,... read more

Microsoft 365 Business is a very compelling platform for the small business, particularly those that are "born in the cloud,"... read more

A friendly reminder about least privilege access and other simple stuff January 31, 2023
But have you turned multifactor authentication ALL the way on? December 9, 2022
What I am most excited for in 2023 after Ignite 2022 October 31, 2022
Alternatives to OneDrive and SharePoint (and when to consider them) September 1, 2022
Reader Question: How can I set up a “Deny-by-Default” Conditional Access Policy? August 19, 2022