Three years ago, I decided to start a new holiday at my office. I got the idea from an old friend of mine back in college, who randomly put on a cape one day, and decided to declare Casual Cape Day.

This kind of thing has been done before, so certainly there is nothing particularly original going on here, even in my adaptation… but nobody was going to come over to my desk and grant me permission to bring this event into my workplace. I had to take this idea out of my head, and act on it myself in the real world.

Originally, I had no plans to try and spread this holiday to a grandiose national or worldwide level, or anything like that. I just wanted to share the spirit that moved me with my co-workers–after all, those are the people I spend the most time with, outside of my own family members.

It is important to remember that I am not the owner of the company I work for, I’m not an executive, not a manager–I’m not even a team lead. Just a worker bee. I had no authority to declare a company holiday, no spending account that I could use–nothing like that. But, I just took a chance and went for it, and hoped that it would all work out in the end.

I’m happy to report: It did. Everyone was very supportive, and all expenses were covered. Even though they were completely ludicrous. And now, we just celebrated our third year of this absurd holiday. A few of us posing for a photo can be seen below. 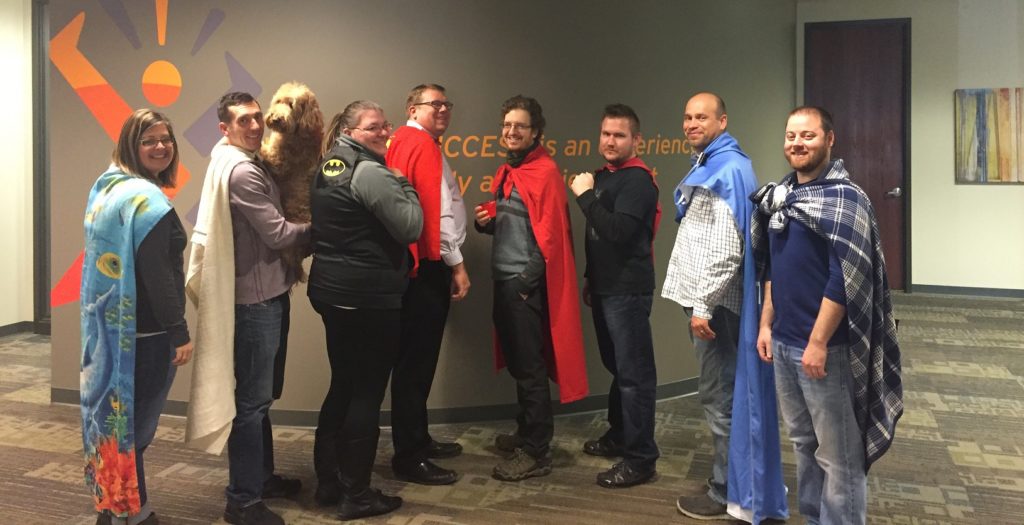 My Email to Staff about CCD

It’s that time of year again, folks—it’s almost here. It’s happening…. Tomorrow.  What day is tomorrow, you may ask? Why, it’s Casual Cape Day of course! But why would someone want to wear a Cape all day long?  I’ll tell you why.

You see, Casual Cape Day, or “CCD”  for short, is all about celebrating our Super Powers together.

You might not have realized it, but in fact, you belong to an incredible group of human beings with special powers; 99.9 percent of all people who have ever lived before you (and a few billion still living today) have never had the amazing capabilities and opportunities that you do right now. Don’t believe me? Go see for yourself. That’s right: you already belong to the top 1%. Congratulations.

First World infrastructure, widely accessible public education, clean water, electricity, and all kinds of other modern blessings and marvels (e.g. the Internet, all the technology we support every day, etc.) has made your life very easy when compared to that of our ancestors and even present day distant cousins living in other countries.

These miracles are now so ubiquitous in our lives that they have become almost invisible to us. That’s a real shame, because even at this moment you have access to nearly every place there is to go, every food there is to eat, and in general almost everything and every idea that has ever existed (not to mention quite a few ideas that are still under development). That’s a rather remarkable thing.

What you can learn, do or experience in your lifetime shares almost no limits in common with even the most insanely richest of rich Sultans and Monarchs from just a couple of centuries ago. What is easily accessible for you today would have been impossible for them in their time.

So what will you do with your Super Powers today? Or tomorrow? Or the next day?  Here are three things that I am going to do to celebrate on Friday with some of my favorite Super Heroes of all time (that’s you guys):

I would be thrilled if you could join me for any or even all of the items listed above.

P.S. – Your Cape doesn’t have to be fancy, any old Cape will do, and in fact the more Casual the Cape, the better. Leave your Sunday Best Capes at home. Blankets, towels, old t-shirts or sweatshirts will work just fine.

If you are able to read this, no matter where you are in the world, it means that you have access to an Internet-connected device, and can read English. Those two demographics right there place you into some pretty incredible circumstances, when compared with a lot of the world.  Whenever I point out how great we have it in this context, some people immediately get it, but I have learned that a certain set of other people (I don’t know what they share in common outside of this response) tend to recoil a bit, and feel “privilege guilt” kick in, as a knee-jerk response.

I don’t fully understand the reasons for this guilt response–you should only feel guilty if you’ve done something wrong. By contrast, I just feel grateful, and then I let that gratitude inform my behavior moving forward. I think the results are much better; I hope that by sharing this idea, those who tend toward a guilt response can re-habituate toward this line of thinking, even if it is not natural for them at first.

Why? Because guilt tends not to produce the right kinds of action. It may cause people to do something, to feel something. It might even convince them to open up their wallets and donate money from time to time.  But I really do believe that it is not valuable in the end for that person. It is a net-negative feeling that breeds skepticism, doubt and other downers.

By contrast, gratitude is a deeply positive feeling–it sparks joy in our lives, and spurs greater and more generous actions moving forward. And I’m not necessarily talking about monetary donations, either! The spirit of gratitude can move you in all sorts of unpredictable ways.

At my company, we have celebrated this holiday on the first Friday in March every year, since 2015.  Anyone who reads this is welcome to join us, or indeed, to celebrate it at any other time of their choosing, and with whatever accouterments they like.

Once we have our first confirmed International celebrant (outside the US), I will be sure to post a special update. I even bought the domain name: CasualCapeDay.com–and I intend to make this a live link once I have something posted up there.

One more note. Do us a favor, and if you like this idea, share it around on social media.

A Brief History of Collaboration and Governance

I have slowly been converting people to the "modern collaboration mindset" during the past couple of years through my op-ed... read more

Automating third-party software deployments and updates with Intune and Scappman

Hey folks! For those of you in my audience who work at Managed Services Providers (MSP's), I wanted to introduce you... read more

Poser alert: Do you think this may be leveraged for Social engineering? Or what…?

Interesting thing appeared in my WordPress comments over the weekend: it appears that someone lifted content from my blog and... read more

The next evolution of SBS

In a previous article, I compared two alternative deployments for a new kind of "Small Business Server" (being defined in this... read more

I want to talk about Windows Virtual Desktop (WVD) as the successor to on-prem deployments of Remote Desktop Services (RDS),... read more

We have to talk about Intune

There was a time, not long ago, when I would have conversations with others like me, who work for other... read more

Behold: The Power of Sensitivity Labels

Even though some people are aware of the concepts of Data Classification and tools such as Microsoft 365 Sensitivity Labels,... read more

When faced with some problem, most of us (let's be honest) are habituated toward shopping for and purchasing some product... read more

I previously commented when Microsoft released new password guidance, which is backed by their own research as well as that... read more